The once venerable New York Times – supposedly the nation’s premier newspaper – today published an op-ed calling for the harassment of low-level government employees as part of the ongoing immigration issue at the border.

Let that sink in. This is not some radical partisan ragsite like Vox or Infowars. It was The New York Times. America’s “newspaper of record” did this. 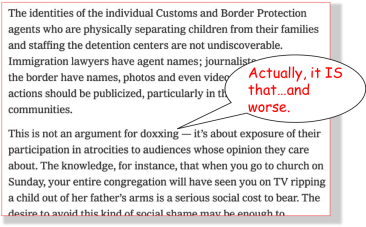 They provided a platform on their opinion pages for an open-throated call to identify, shun and – let’s be realistic here – harass ICE employees at all levels. The article specifically noted that “foot soldiers” (low-level employees) should also be targeted. The author – a humanities professor and attorney in the United Kingdom – claims she is not calling for doxxing. Apparently, she naively believes that her recommendation would not lead to doxxing, cyberbullying and perhaps even violence.

The author’s dangerous and objectionable suggestion is not what primarily concerned me, reprehensible though it was. The fact that such a reckless call to action could find sanctuary in a presumably responsible newspaper is what raised red flags. Is this what journalism and media at the national level in America has come to?

Multiple polls like this one show that Americans increasingly distrust media sources. Even polling that reflects modest rebounds still show an anemic level of trust in American news media. I would argue that this sentiment is both understandable and appropriate if we are talking about the national news media in America – i.e., national newspapers and the national news broadcasters. I would also include most online “news” sites in this assessment. (I still maintain that local journalism is a profession where reporters are producing a good product that gets it right more often than wrong. The “elite” in the national and online news media could benefit from emulating their local peers more often.)

And what has happened to make the media seem so untrustworthy? A number of factors are involved, but I would posit that a large part of the dynamic is financial. In an age where more and more pressure is placed on news media organizations and the journalists within them to turn a profit, standards seems to be increasingly giving way to an emphasis on website visits and social media engagement – i.e., “clicks” – which can be monetized vis a vis ad revenues. This might explain why a presumably responsible editorial board like the one at The New York Times would provide a platform for a de facto incitement to harassment and perhaps even violence. Then again, maybe they like what the author suggested. It is impossible to say.

Of course, op-ed columns do not necessarily reflect the opinions of the editorial boards that approve them. But does the editorial leadership not ultimately decide what does and does not get space on their pages, digital and otherwise? Presumably, they have criteria and standards they apply to this decision-making process, and they don’t let just anybody argue their cases in their opinion section. Whether Times editors agreed or disagreed with the positions that this author took is immaterial. But do they actually believe that her commentary was responsible…particularly in the context of today’s hyper-polarized, tinder box environment? Or, has the need to drive clicks and revenue pushed even the Times to the point where such questions are secondary?

The column in question makes me wonder.

If this is the beginning of a trend, what is next? For example, I noticed recently that there is an emerging debate in and around the LGBT community about promoting children in drag. It came up several times in recent weeks during the Pride Month observance. (As with the immigration issue in the Times op-ed piece, I do not mention this to take sides on the issue of drag kids. Both issues are separate from the point of this blog post.) However, the drag kid controversy suggests an informative analogy here. While responsible newspapers and media outlets can and should provide a platform for commentary on both sides of the day’s issues, where should the line be drawn regarding what is acceptable fare? The reprobates at NAMBLA have been vocal on the drag kid issue. Would America’s newspaper of record offer a spokesman for that organization a byline on its pages? Until recently, I would’ve laughed at an idea like that. Now… I’m not laughing. Whatever else one could say about a NAMBLA-bylined op-ed in a major newspaper or outlet, it would unquestionably prompt a tsunami of clicks, social media buzz, and so on if it were allowed. And that seems to be the overriding goal in more and more of what the national and online news media do. 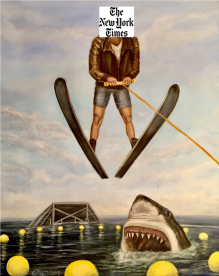 Most Boomers and GenXers know the origin of the phrase “jump the shark”. It stems back to an episode of the once-wildly popular ABC series “Happy Days”. Long story short – “jumping the shark” is shorthand for when a TV show starts engaging in desperate (and sometimes embarrassing) attempts to maintain its viability. Over time, this phrase has evolved for use beyond the small screen.

If today’s New York Times column is an indication of things to come, perhaps the Old Gray Lady and the editors at some other once-prestigious media outlets should start waxing their water skis.

Mike Breslin has more than 30 years of journalism, public relations and strategic communications experience in agency, government, nonprofit and academic environments. His teaching focus is introductory public relations and media research (and writing, as the opportunity permits). His focus as a researcher is the media, particularly news media literacy. He holds a Doctor of Philosophy in Educational Leadership and Policy (Higher Education) from Oklahoma State University and a Master of Arts in Mass Communications from Texas Tech University. View all posts by Mike Breslin, Ph.D.

One thought on “The New York Times has jumped the shark”

Mike Breslin has more than 30 years of journalism, public relations and strategic communications experience in agency, government, nonprofit and academic environments. His teaching focus is introductory public relations and media research (and writing, as the opportunity permits). His focus as a researcher is the media, particularly news media literacy. He holds a Doctor of Philosophy in Educational Leadership and Policy (Higher Education) from Oklahoma State University and a Master of Arts in Mass Communications from Texas Tech University.